I’m ringing in the New Year with the first track of an album that will grow over the coming months. Slower is a continuation of the work that started with the Character Weekend and 1 Vox series. This time, however, each track proceeds at a more measured pace. Not quite drone, not quite ambient, Slower develops sounds with patience. A new track will be added every week or so until…well, I decide that it’s done.

A new release in the Exquisite series is now available. Less Exquisite is an evolution of the game developed by John O’Brien and I for Exquisite Coast One and Two that uses a tight set of technical constraints as an artistic challenge. The instrument has been expanded – the Make Noise 0-Coast is now augmented by the Moog Werkstatt and a handful of Eurorack modules – and we’ve added a conceptual constraint. In the original Exquisite Coast we had defined only the instrument and a rough time limit. For Less Exquisite we came up with a textural/formal constraint that we came to simply call “slower.”

Stay tuned for one more Exquisite release coming in 2023!

I’m excited to announce the release of my new album, 0 Plural. My excitement is twofold. First, the album is a return to longer form works after a decade of nearly obsessive focus on the short character pieces that comprise the Character Weekend and 1 Vox series as well as most of the Exquisite series (a collaboration with John O’Brien). But this release is also different since it introduces the first sets of limited edition prints to be produced with Tentacle, an algorithmic drawing program that I developed with Amir Hariri. Three editions are available – one 12”, from the cover art, plus two 7”, one for each track on the album.

The album and the prints are all available on on Bandcamp. 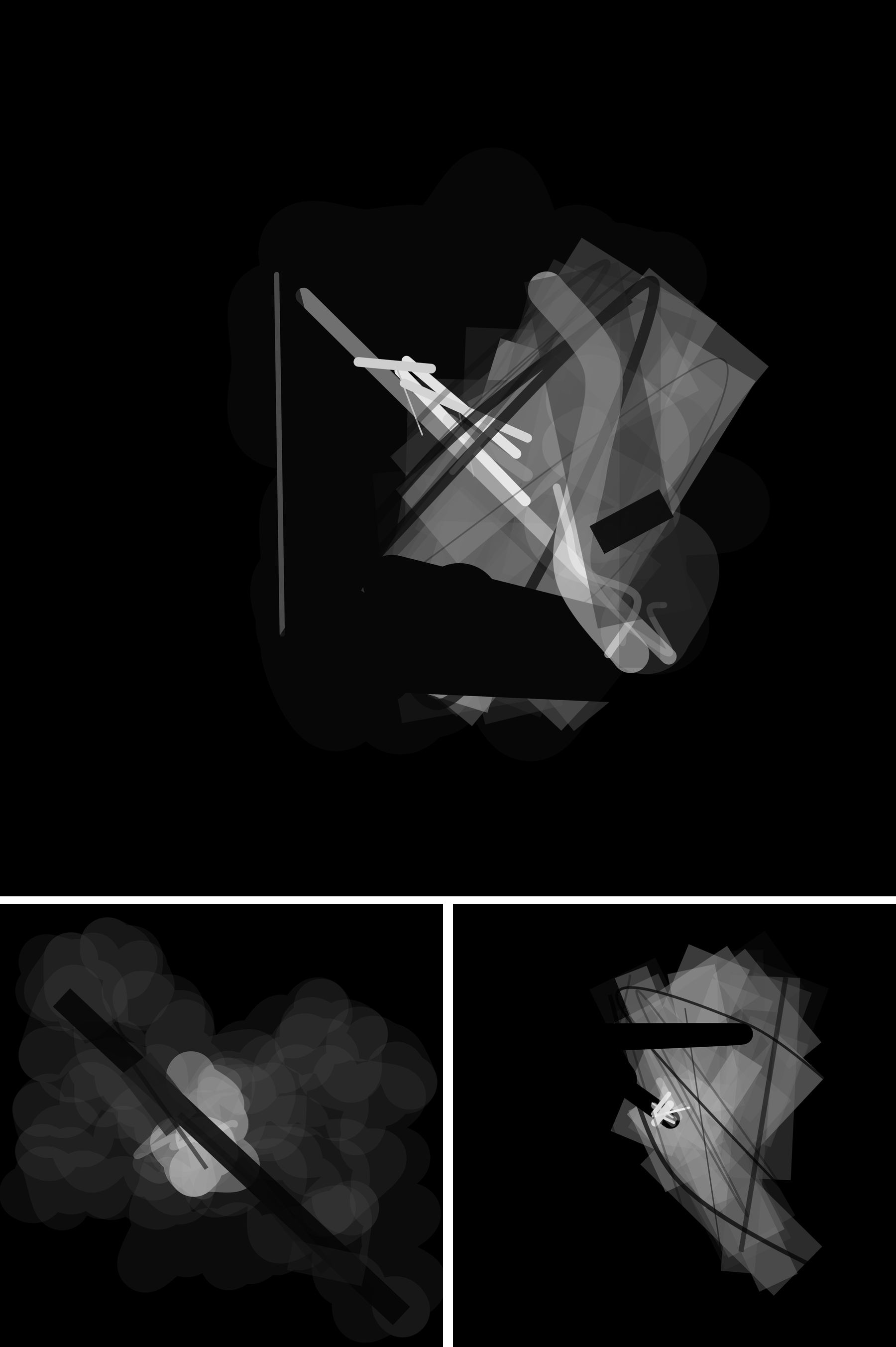 Better late than never, the follow up to 1 Vox, Vol. 1 finally makes it out into the world. 1 Vox, Vol. 2 is the second set of etudes that employ tight constraints to encourage focused exploration of the capabilities of my small modular synthesizer. Each piece uses only one voice (that is, one sound generator) plus the small set of modulation and utility modules in my rack. In order to center my attention on the capabilities of the system, I used no external controllers or sequencers. I’ve long focused on radical constraints in my work, so while this performance interface is more limited than many of the instruments I’ve built, a tightly controlled possibility space is a natural place for me to explore.

I’m excited to announce the release of Alternator I.

The last time I left the house before leaving the house got weird was March 12, 2020. If the timestamp on the audio file can be believed, Alternator I was recorded two days later, making this my first release created entirely during the stress and uncertainty of the coronavirus pandemic. Of course, the timestamp almost certainly can be believed. My doubt is entirely due to the changing perception of time here in Lockdown World. Before I glanced at the file’s date, I would have guessed I’d recorded this several months prior, not the mere month that had passed before I started the final mixing and mastering process.

Alternator I is, depending on how you look at it, either the second release in a series of mini-albums that started with 1 Vox, Vol. 1, or the fourth release going all the way back to the Character Weekend 01-03 trilogy from 2012-2013. The Character Weekend series was inspired by the concept of the 19th century character piece, a short musical composition, often for solo piano, that sought to express a single mood or impression. In addition to the time constraints typical to this type of work, these pieces employed fairly radical instrumental constraints in order to encourage focus and deep explorations into sound by limiting the means of sound production available.

1 Vox, Vol. 1 continued this practice. Like Character Weekend, it consists of a set of short pieces exploring a single musical idea. Unlike the Character Weekend series, most of which used instruments at least partly of my own creation, 1 Vox relied entirely on instruments built by others, specifically my small Eurorack modular synthesizer system. I further limited my options by requiring that all performance control would be that which is contained within the rack itself — no outside controllers of any sort. Since a modular synthesizer is typically put together piece by piece at the whim of the musician, I did get to practice a type of construction, but one that allowed me to focus on exploring the instrument’s timbral possibilities without the distraction of having to build it from scratch. The prohibition of outside controllers also served to further that focus.

I resisted the growing modular synthesizer trend for a long time. My practice of over 25 years is almost exclusively live improvisation. Since an improvisor needs to adapt quickly to changing situations, simplicity of interface has long been one of my primary objectives when choosing or creating instruments. The modular world won me over, however, when I acknowledged its power to provide a wide range of timbral manipulation and development tools. My work has long dealt with sound as raw material from which I create dense sonic fields where melody and harmony are not the focus, and in which even rhythm is tied more to timbre than to any sense of pulse or pattern. Even a small modular system like the one I use still has an enormous depth to it. It can be patched and re-patched over and over, each time revealing new discoveries in sound. These systems reward deep dives into even small subsections of the instrument. Though a modular synthesizer requires more pre-performance work, that work is a rich source of discovery of new sounds. This allows me to use a familiar set of tools, but reconfigure them at will, learning something new about the sound sculpting possibilities with each reconfiguration.

As the next step in a continuing series of explorations of my instrument, Alternator I is both a continuation of my previous work and a hint at new directions. As with 1 Vox, everything I used to create the music is contained within my modular synthesizer. Unlike both 1 Vox and the Character Weekend series, here I’ve exchanged short explorations of small ideas for longer pieces that take more time to develop. The most notable difference from those works, however, is the means by which the music is created. All of them relied on live improvised performance, during which I was in complete control of every sound at every moment. Alternator, in contrast, is a generative work. This means that, as when creating 1 Vox, I set up a patch to use for (generally just one) performance. This time, though, I was not actively involved in the actual performance as it unfolded. Once I was finished creating a complex set of interactions within the instrument, the compositional work was done, and the piece generated itself. All that was left for me to do was hit record.

In some ways, Alternator is a more patient work, one that allows sound to unfold over a longer period of time. It spends more time working through small ideas, even allowing motives to repeat or reappear, while remaining unafraid of making quick, radical changes from time to time. What is attractive to me about this way of working is that if the chain of influences is complex enough, the system balances surprise and predictability. Despite continual change, chaos is not allowed to rule. Toward the end of this process, my role becomes that of listener, patiently waiting to hear how things flow and change, making small tweaks until there is a satisfying balance.

This release, along with new 1 Vox and Character Weekend releases that will follow in summer 2020, marks a culmination of countless hours of work adapting to a new set of instruments and to new ways of working, after many years engaging primarily with software that I built myself. I now feel I’ve created a solid foundation for the next few years (at least) of explorations in sound and process. I’m excited to see how it will lead to many more iterations of these series, and new series to come, as I further develop these new practices and discover ways to reincorporate the old.

The Character Weekend, the trilogy of small sets of improvised solo piece that was my dissertation piece, are now up on the major streaming and download services.

1 Vox, Vol. 1 Now Streaming at a Music Service Near You

1 Vox, Vol. 1, the EP I released on Bandcamp last December, is now up at all the major (and a bunch of minor) music streaming and download sites. Search your favorite service, or follow the links below.